Porsche might have shown its Landjet crossover to dealers

DENVER — If there’s a car that best embodies a scrappy, tenacious, little puppy, it’d be the new 2022 Audi A3 and S3. And yes, the A3 is mostly just bark on account of its snarly (in a good way) looks, but the S3 brings a proper bite with its performance-minded handling and acceleration.

It’s high time Audi treated us to a new A3/S3 pair, too, as the outgoing cars have been fully swallowed up by a new field of tiny luxury sedans that are also both great to look at and great to drive. We’re sure you’re aching to hear about the soon-to-come RS 3, too, but be patient. That five-cylinder firecracker is coming next summer.

In the meantime, let’s start with the basic A3 that is already at dealers and waiting for you at a $34,945 base price. Audi largely kept the same, basic formula as we’ve seen for the past seven years. The 2022 car is available as a sedan only in the U.S. — Europe carries on with the Sportback (hatchback) — and you can get either front-wheel drive or Quattro all-wheel drive. The seven-speed dual-clutch automatic transmission carries over for both versions. One notable difference this time around is that the FWD and AWD models are created equal with the same power output from Audi’s 2.0-liter turbocharged four-cylinder. Before, the all-wheel-drive model had a significant, 44-horsepower difference. Instead of just upping the power to the 228 horses of the old A3 all-wheel-drive, Audi split the difference between the AWD and FWD models with an engine putting out 201 horsepower and 221 pound-feet of torque for 2022. 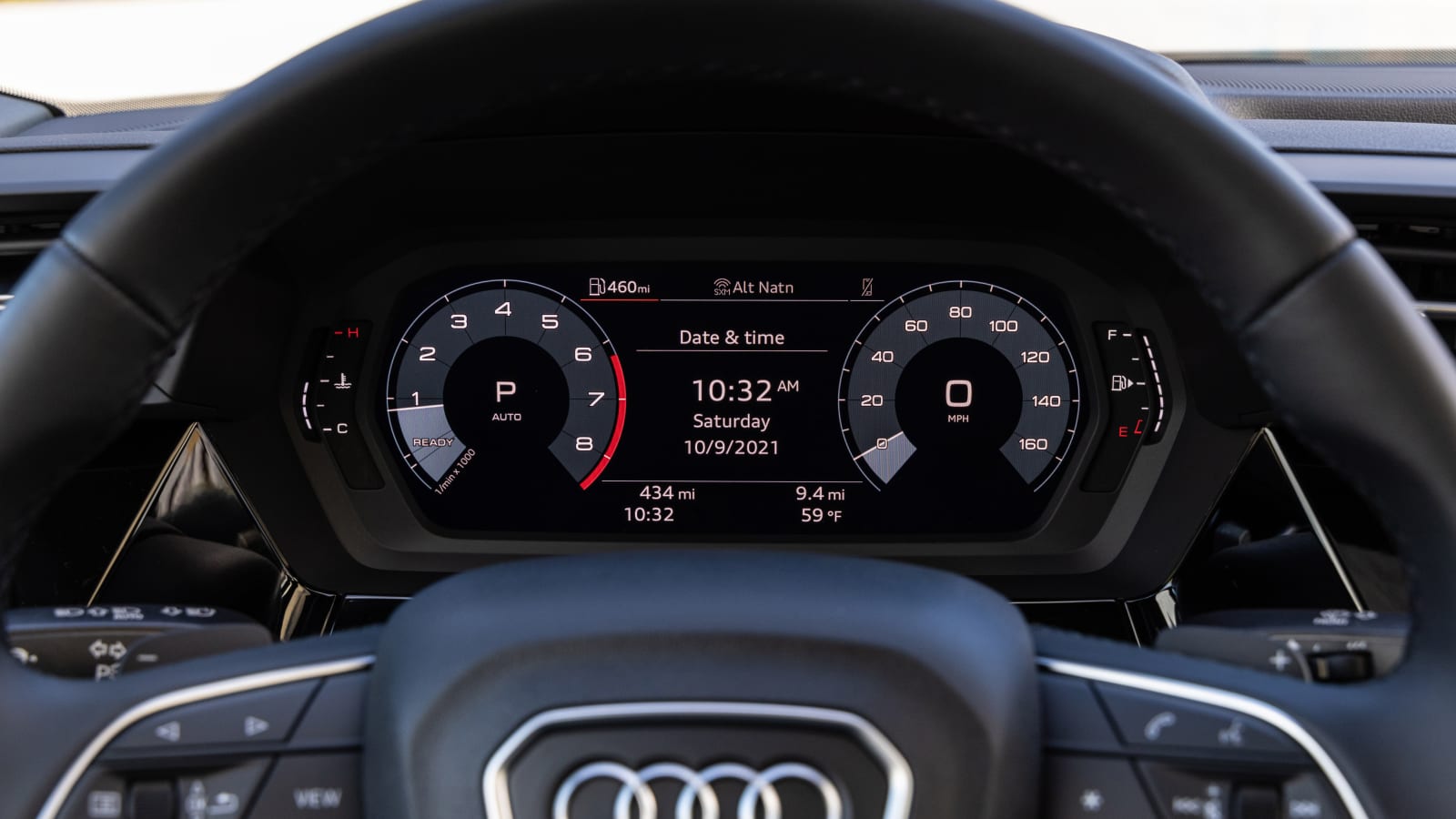 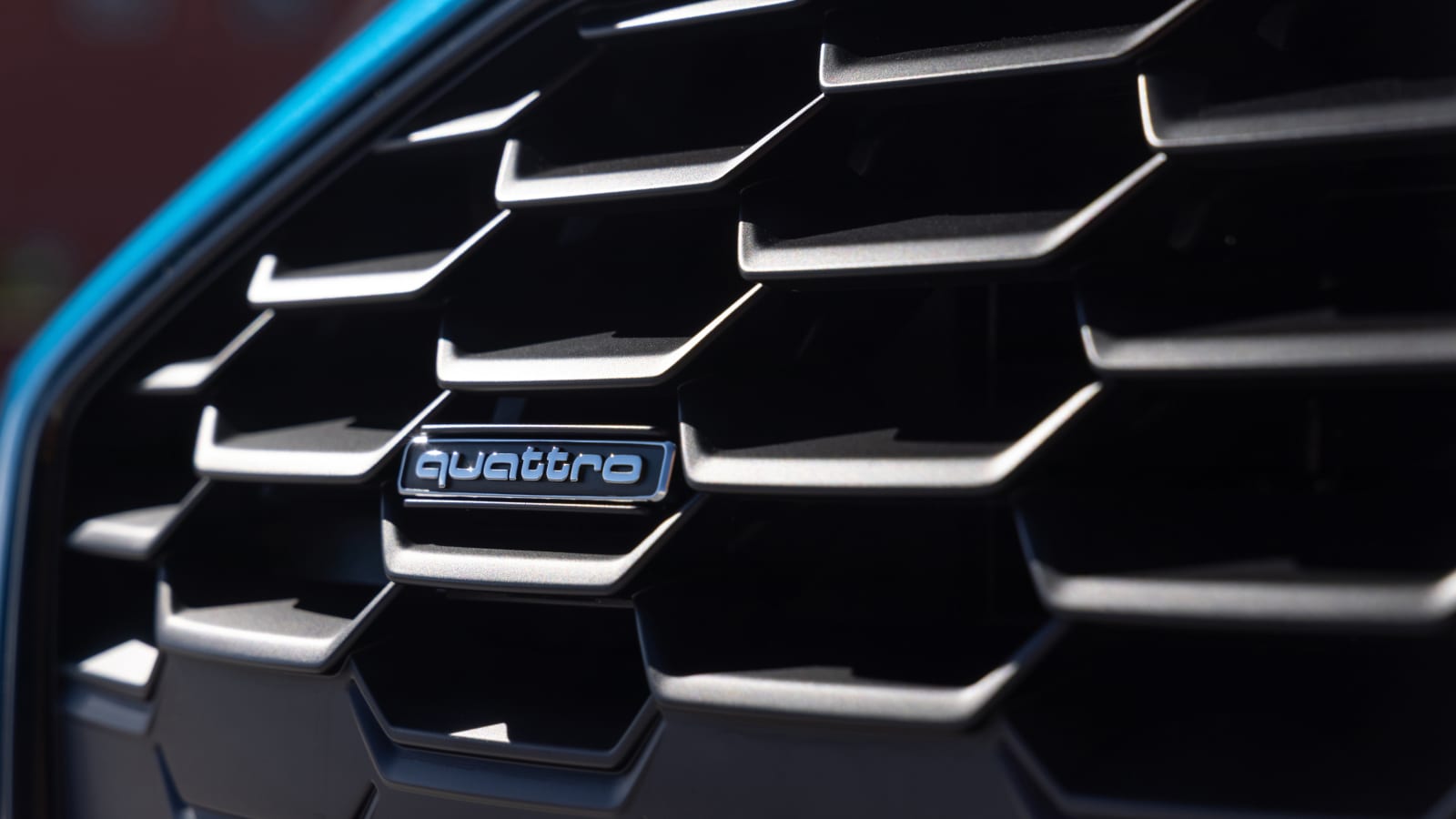 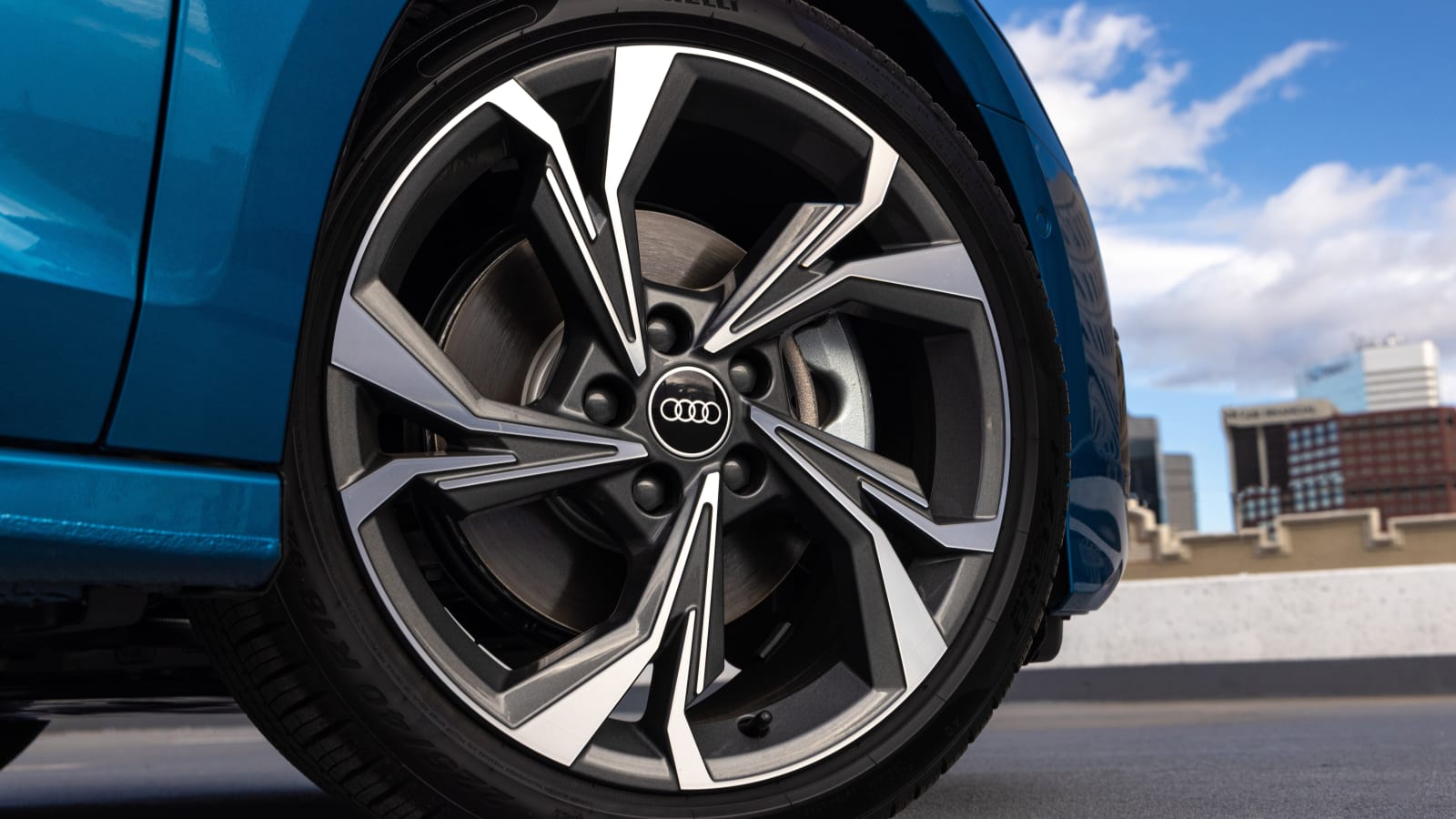 There is a method to the madness beyond an obvious slump in power, as Audi says it focused on fuel economy for the new A3’s powertrain. That’s why it’s also featuring a new 48-volt mild-hybrid system. Combine the more efficient powertrain with greatly improved aerodynamics (it went from a 0.33 Cd to a 0.26), and you’re left with a car that offers about 23% better fuel economy across the board than before. The new Quattro car achieves 31 mpg combined, while the outgoing car could only muster 25 mpg combined. Audi says the mild-hybrid system can even provide a short power boost of 12 horsepower and 37 pound-feet of torque on the initial shove off the line. We’re super impressed with the start/stop system that comes along for the ride, too, as it might just be the smoothest on any new car today.

Design is big in this segment of plucky luxury cars, and Audi decided to make its new A3 stand out by giving it the honeycomb grille we’re accustomed to seeing on Audi RS models. Aggressive sculpting of the hood, and strong fenders increase the effect of it looking like a dog ready to pounce on unsuspecting prey. Nobody will be mistaking it for the flowy, smooth Mercedes-Benz CLA.

Audi keeps the energy level at that height when you climb into the A3’s interior, too. It’s featuring a number of firsts for Audi interior design, which is a mix of intriguing and, well, just bad. Anybody who wishes they lived in a laser-filled Cyberpunk future will feel right at home. Two air vent modules flank the instrument cluster like pods floating in space. The sharp, slanting edges continue, tracing semi-coherent lines across the dash in an ostentatious manner. The interior door handles appear to be upside down versus the usual orientation. And Audi’s chunky gear lever is gone in favor of the same beard trimmer-style shifter nub seen on the 911 and new GTI/Golf R. 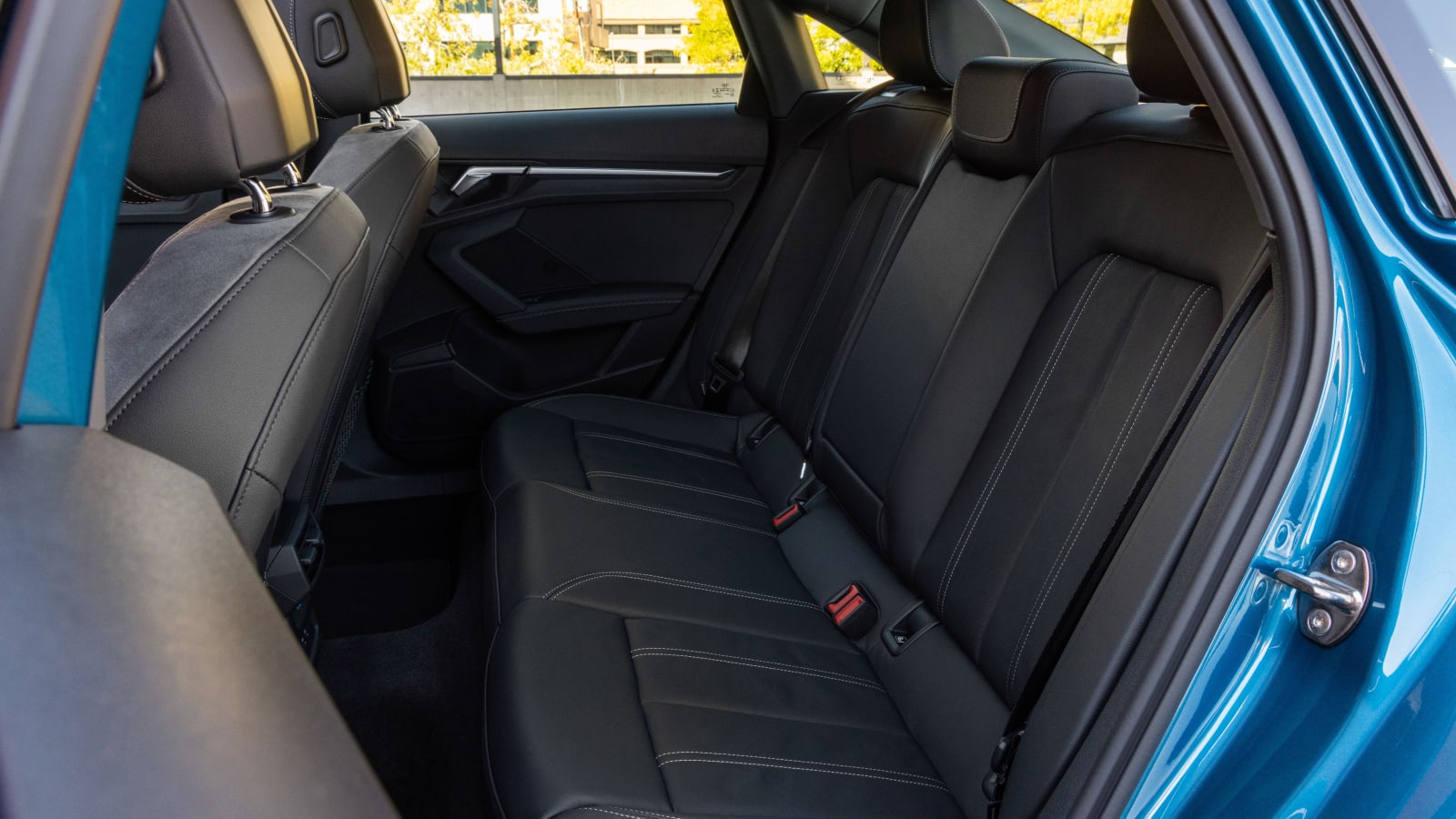 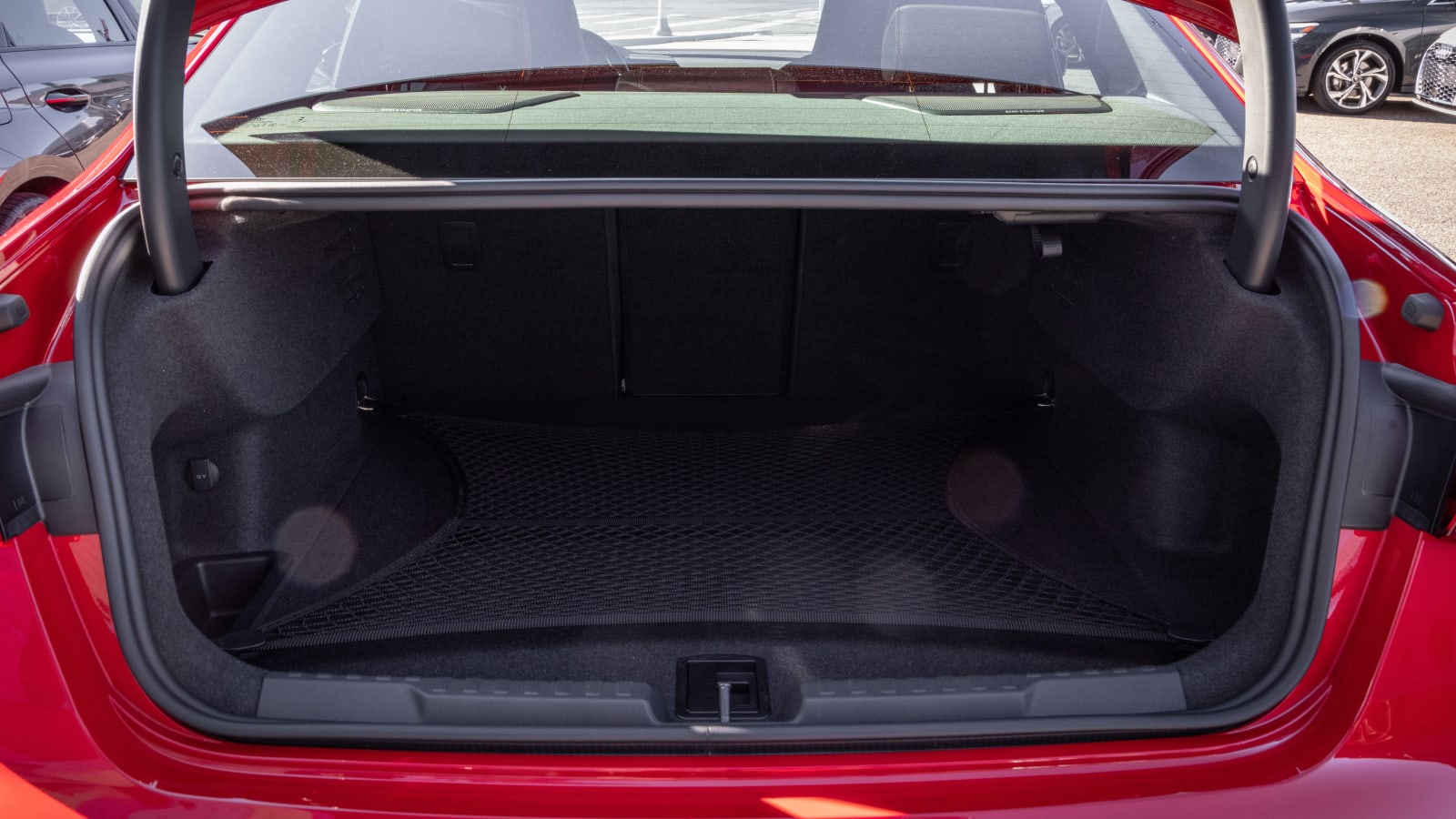 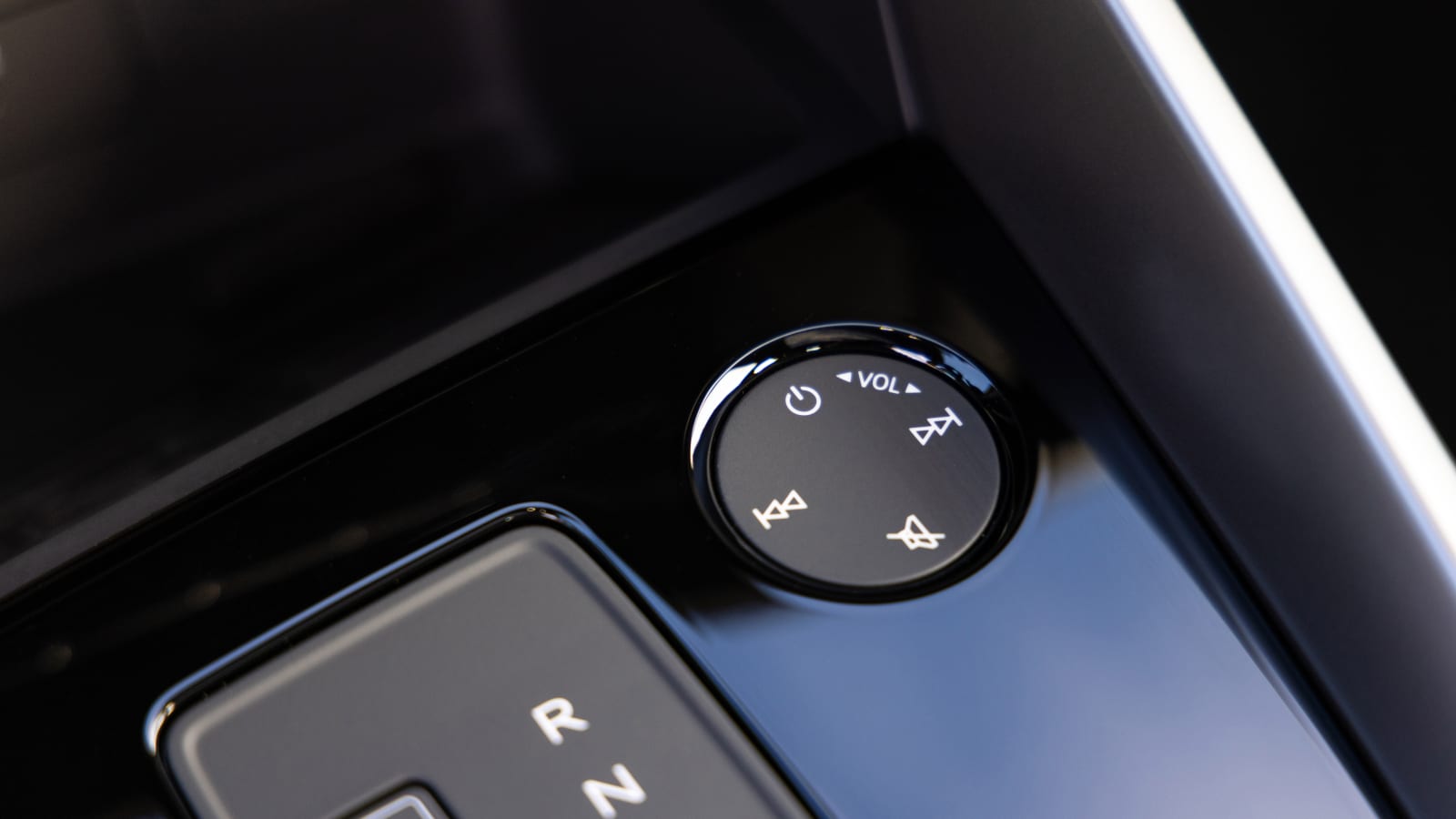 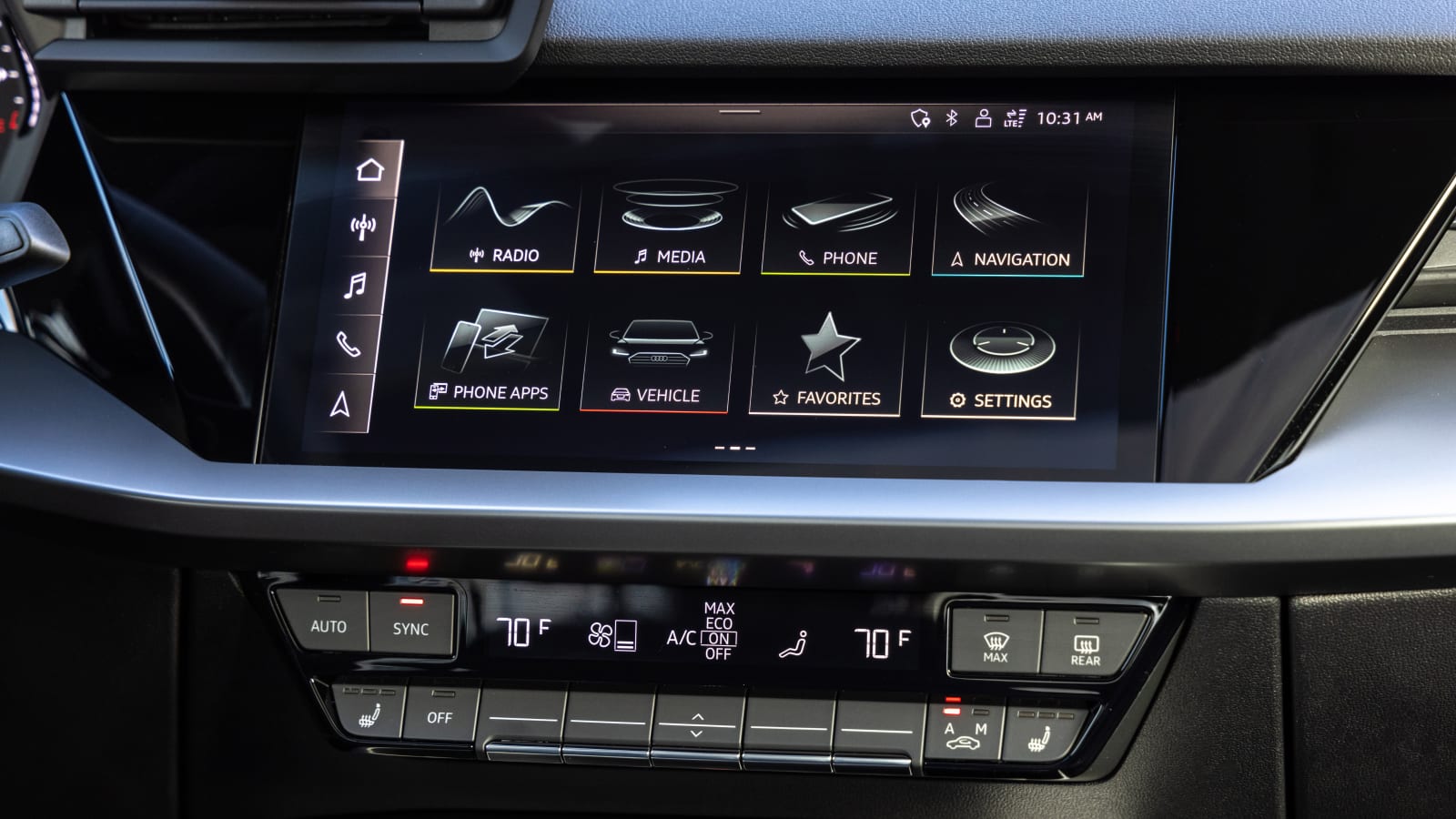 Just ahead of the little shifter is our least favorite feature of this new interior: the volume scroll thingy. Instead of the beautiful, clicky volume knob that also served triple duty as the last/next track control and on/off switch, the A3 now has a flush touch haptic “button” attached to the flat surface of the center console that you twirl your finger around to turn the volume up and down. It’s the definition of change for change’s sake, and it’s definitely more difficult than the old console-mounted volume knob — good luck finding the pad and getting your finger positioned properly in the circle to be read as an input while moving. Yes, Audi has a handy-dandy volume scroll wheel on the steering wheel that works wonders and allows you to ignore this “innovation,” but such a thing should be a helpful redundancy not a necessary work-around.

When it comes to utility, this A3 is a little better than the last, because it’s a little bit bigger in every direction — 1.4 inches longer, 0.8 inch wider, and 0.5 inch taller. Audi pointed out that the A3 is basically as long as the A4 was when it launched here in the 1990s, so there’s some historical context for you. Sitting in the back seat is not an issue for legs, though taller folks (above 5-foot-10) will be brushing the ceiling with their noggins. Trunk space is average for a compact luxury car at 10.9 cubic feet, though the S3 is worse at 8.3 cubes. Both numbers are poor compared to non-luxury compact cars.

The bones of this A3 and S3 are still based on the same MQB Evo platform as the new Golf GTI, so we expected a dynamic performance on the Rocky Mountain canyon roads Audi put us on for this first drive. We started the day in an A3, and enjoyed a comfortable, reasonably quiet highway stint before ducking into the mountains. The A3’s chassis immediately showed its base-level competence, and we do mean base, as our test car was not fitted with the A3’s optional Sport suspension (passive and fixed) that lowers the car by 15 mm (0.6 inch) and stiffens things up. It thankfully doesn’t exhibit the expected, front-heavy Audi handling behavior when the road turns twisty. Popping it into “Dynamic” mode unlocks heavier-but-numb steering and a perkier throttle and transmission. 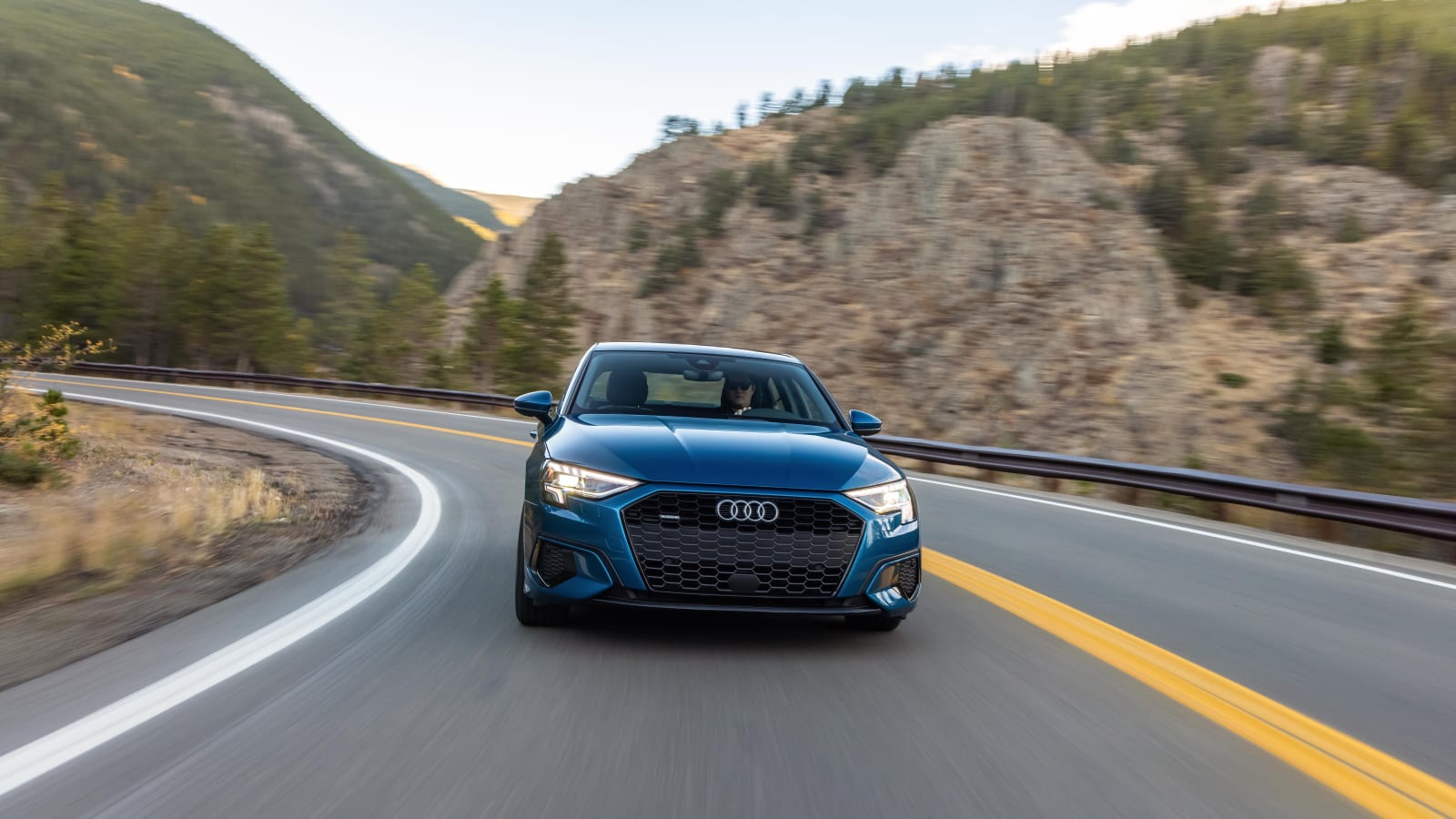 If the A3 is dynamically let down anywhere, it’s under the hood. The engine’s note is far from graceful as it churns and winds its way into the upper rev ranges. You need it to get the 3,494-pound car up to speed at elevation — Audi claims a 6.3-second 0-60 mph time with Quattro (a half-second slower than the previous car), and that’s using the surprisingly good launch control start. Yeah, even the base A3 has launch control. Cool?

We didn’t care much for the A3’s transmission response in Manual mode (downshifts take eons versus the otherwise quick upshifts), so just leave it in the auto sport shifting mode. Audi’s programming is a touch too quick to upshift between corners, but it’s right more times than it’s wrong. Most A3 owners are likely going to be putzing around the city or making their daily commute, so its less-than-thrilling performance isn’t so horrible in the context of significantly better fuel efficiency. Audi made a choice, and it chose high MPG.

Let’s move on to the tiny Audi you really want, though: the S3, starting at $45,945, or $11,000 more than the A3. If nothing else, know that the S3 is a damn good hoot to wheel up and down a mountain pass. Its 2.0-liter turbocharged four-cylinder cranks out 306 horsepower and 295 pound-feet of torque, besting the last S3 by 18 horses and 15 pounds of twist. There’s no mild-hybrid anything going on here, and though a mini electric boost would be neat, this little sedan is rapid enough on its own. Audi claims a 4.5-second 0-60 mph sprint, which is one tenth quicker than before.

With its power-packed turbo mill, the S3 bolted up and down the Rockies with splendor and superb control. The S3’s dual-clutch responds with the same speed and verve as the engine, as it shoots its way through the rpms to redline over and over again. It’s accomplished enough that we found ourselves sticking it in manual mode most of the drive just to keep enjoying how quickly it responds to inputs. And childishly, we also wanted to hear the manufactured rumbling crackle from the quad exhaust on the overrun with every downshift. The exhaust is undoubtedly “present,” just as Audi terms it in the car’s “Individual” mode settings. And the engine note is sweet, too, as there’s a little more character and pitch change beyond the constant blat, blat of some small turbo engines.

Audi’s done a splendid job dialing in the just right ride/handling balance with the S3, at least in the electronically-controlled damper-equipped car we drove (the optional S sport suspension is new for 2022 and comes in the $1,100 S Sport package). In Comfort mode, the S3’s ride is hardly any worse for wear than the A3’s. That’s excellent, because turned up to its max, the S3 is remarkably good when pushed. Body roll is largely flattened; steering is super precise with a good heft, and its compact footprint makes it super-easy and confidence-inspiring to fling about. We wish the S3 had the same torque-vectoring rear differential as the new Golf R does (it’s an Audi, shouldn’t it at least have the same toys as a Volkswagen?), but its all-wheel-drive system still bolsters the car’s quiet cornering confidence, making its power delivery to the road supremely effective. It never wants to get sideways, but you can loosen the reins a bit using the car’s ESC Sport mode to keep the nannies away. 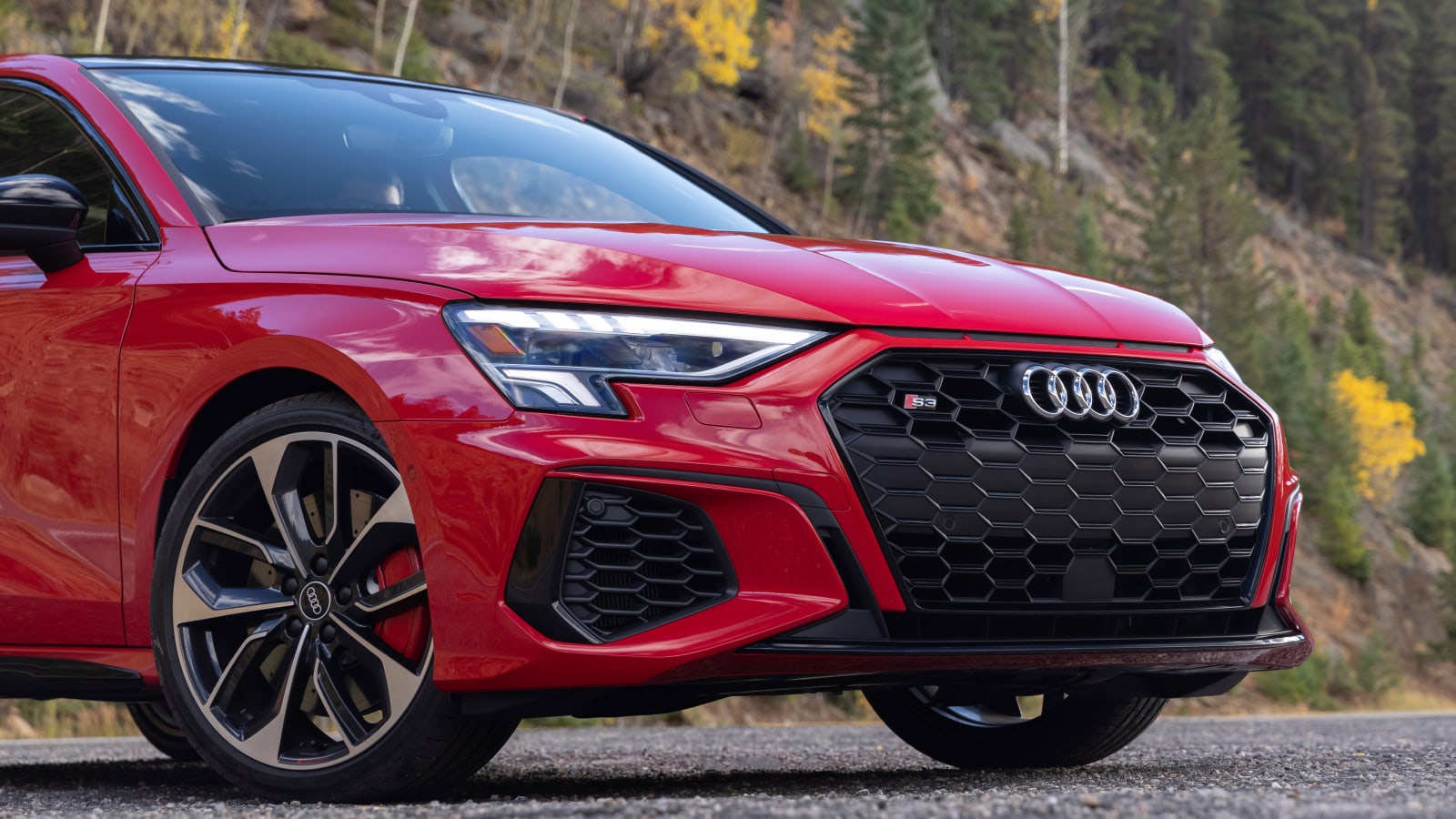 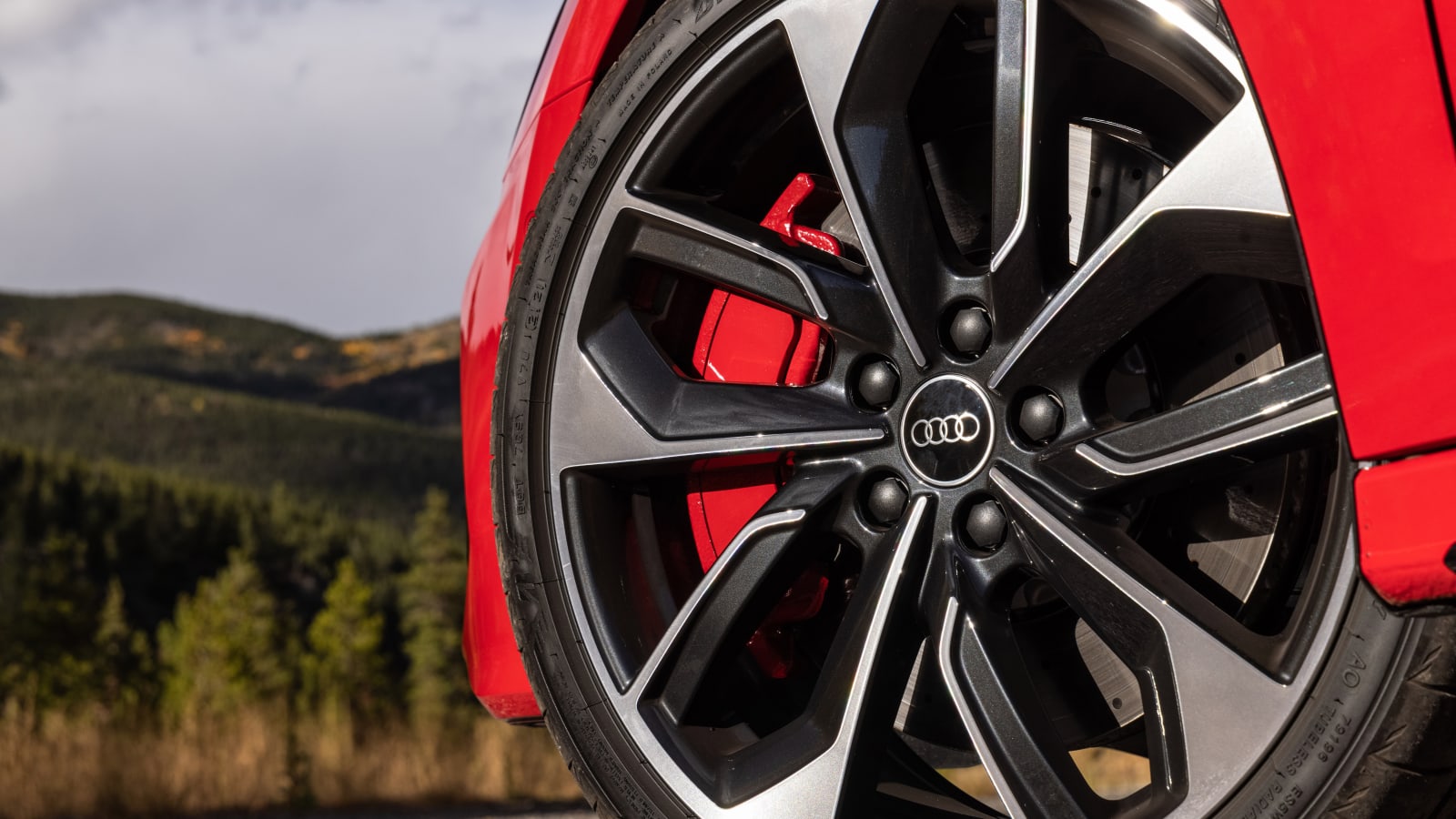 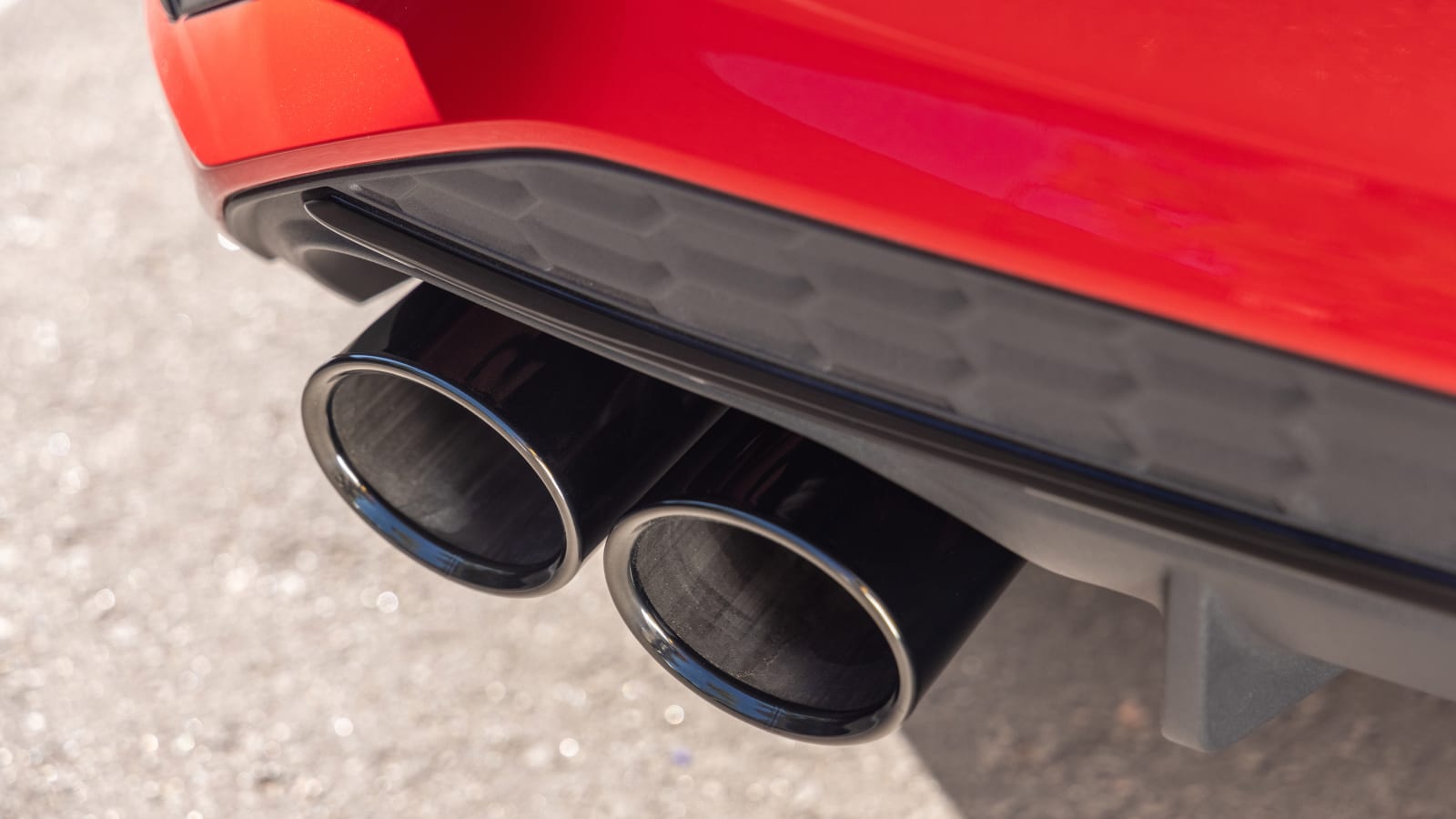 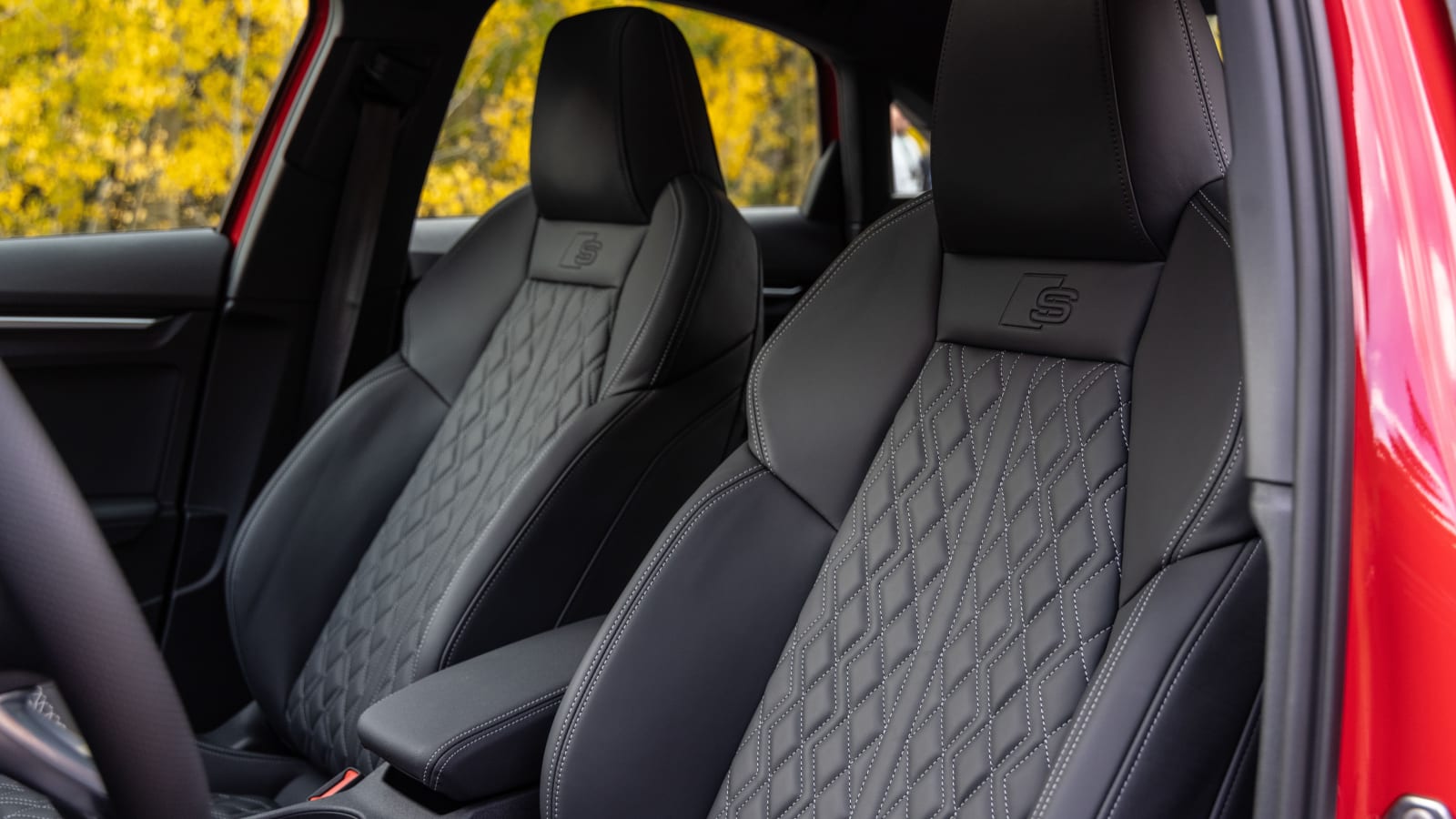 You’ll be able to tell it’s an S3 by the extra-large honeycombs in the honeycomb grille and side air intakes alongside the rather obvious “S3” badging. It also gets larger standard wheels (19-inchers are the largest optional wheels) that hide big, 14.1-inch cross-drilled front brake rotors. Audi also adds side skirts, a rear lip spoiler and even more honeycombs in back. Parked side-by-side, you’ll also be able to tell the S3 sits 15 mm (0.6 inch) lower than the A3 (or the same height as its optional Sport Suspension). Turbo Blue and Python Yellow are S3-exclusive paint colors, and while we didn’t get to see them in person, they look like the colors to get in Audi’s online configurator.

The interior adds the usual S-car gear. Nicely bolstered sport seats pair nicely with a better and sportier-looking steering wheel. Plus, you can spec either aluminum or carbon trim, both of which are unavailable on the S3. General materials quality is nice where it matters, but it’s obvious that Audi is saving some money in some areas where we find pretty rough, hard black plastic. The old car might’ve been nicer in this regard.

Per usual for Audi, there’s no shortage of tech abounding in both the A3 and S3. A 10.1 touchscreen and 10.3-inch digital cluster come standard, but you can spec the cluster screen up to a 12.3-inch unit via the options list. Audi didn’t tack on the additional climate control screen we’ve seen in plenty of its other models, and we’re fine with that, as the physical climate controls are easy and intuitive to use. Standard driver assistance options are disappointingly limited to forward-collision and lane-departure warning systems — you need to spend extra if you want blind-spot and rear cross-traffic warning, lane-keeping assist or adaptive cruise control with lane-centering.

This A3/S3 combo ultimately lands right into the sandbox we were expecting them to. It’s a fashion-forward sedan for a respectable price, and contains many of the features and tech you’d see on much more expensive Audis. The S3 is no surprise, either. It’s more livable and dialed back versus the Mercedes-AMG A 35 or CLA 35, but it’ll still heartily mix it up with both those cars. Audi put together a super-competent, spunky A3. And the S3 is a car any enthusiast could jump out of and say they had a blast. Now, we just have to wait impatiently for the five-cylinder.

Porsche might have shown its Landjet crossover to dealers

How to change your car’s spark plugs