INDIANAPOLIS, In – The energetic vibe in Garage B12 at the Indianapolis Motor Speedway is no different than any other as race teams prepare for the May 30 Indianapolis 500.

Mechanics check every connection and wing angle on the white and red No. 16 race car, engineers pore over data looking for a millisecond more speed that can put them in position to win at the Brickyard, and the sense of anticipation makes it clear this isn’t just another race.

It’s a drill repeated across the 35 entries. Yet, there’s never been anything like what’s happening in Garage B12.

The Paretta Autosport team, created by longtime auto industry and motorsports executive Beth Paretta, is comprised mostly of women in an effort not only to win this race but also to inspire others, particularly young girls and women. They hope young people with a dream will see their effort and realize it’s possible for anyone to have a presence at any level of a race operation. 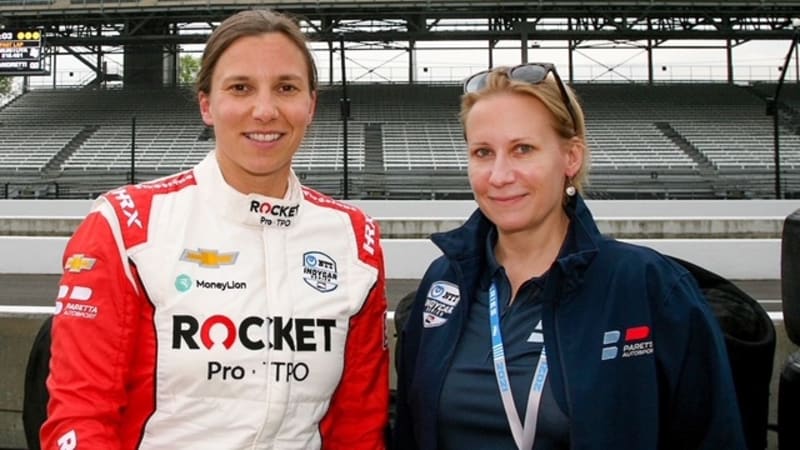 “We’re trying to provide opportunity and hopefully some inspiration both for kids and for women everywhere, to push and work hard to also know that anything might be possible for yourself,” said Paretta, the first woman to direct the performance and motorsports operations for an auto manufacturer when she joined Fiat Chrysler Automobiles in 2011. She went on to form championship sports car racing teams and helped Team Penske win NASCAR titles in the Xfinity and Cup series.

Women in the Indy 500 go back to 1977 when Janet Guthrie became the first to qualify for the race. Now, women work in multiple jobs throughout the paddock. Paretta Autosport is the first entry in the 105-year history of the race that’s owned by a woman, driven by a woman and, to a great degree, crewed by women.

“I get chills,” said Linda Conti, spotter for Paretta driver Simona de Silvestro and the most experienced woman on the team. She worked her first Indy 500 in 1997 and became the first woman to manage a team in 1999. “We’ve had women throughout in different sectors. But to see a whole team that’s focused on women forward, giving women the opportunity in every single part of the team, I think this is groundbreaking.”

Paretta secured a technical alliance with powerhouse Team Penske, hired de Silvestro to drive and assembled a personnel group mixed with experience and promising talent – from Conti to crew members with motorsports engineering experience to some with no racing background at all.

“We’re very aware of our unique position to the next generation, the eyes that are on us, in particular the young ladies that are out there watching this unfold,” said Lauren Sullivan, the team’s aerodynamics engineer who was a Boeing wind tunnel test engineer before moving into motorsports. “We hope that by seeing us, you guys realize that we didn’t do anything extraordinary to be here. We are just like you, and if you can see us, you can be us. By all of us coming together, we’re hoping to make that message very clear.”

Paretta had formed a team – Grace Autosport – to race in the 2016 Indy 500 but never made it to the track. With many established IndyCar teams pulling back their operations that year, there wasn’t a suitable partnership available to obtain a car.

We made it! What an emotional day knowing that you have just 1 shot at making the race. Thank you to the whole team for the hard work. We definitely got in the hard way. Now let’s go racing #indy500 pic.twitter.com/nyRvnvjdSn

The key element was her connection with Roger Penske, who last year purchased the speedway and the IndyCar Series. One of his initiatives was to establish greater diversity in the sport, announced last October.

“I reached back out to him to say, ‘Hey, what is this about and what’s your ambition with this program?’ And he said, ‘Let’s talk,’” Paretta said.

Many on the team were recruited from Team Penske’s racing operation, and others from the NASCAR Technical Institute in North Carolina. Team Penske also supplied several men to mentor the women, many who’d never worked with an Indy car.

“This isn’t just for fluff,” Conti said. “The women are the ones working on the car, with someone supervising and teaching them every step of the way. I think if this was just a rookie stand-on-your-own team, it would be a lot more difficult. But Beth was smart enough to team up with the absolute best with Team Penske.” 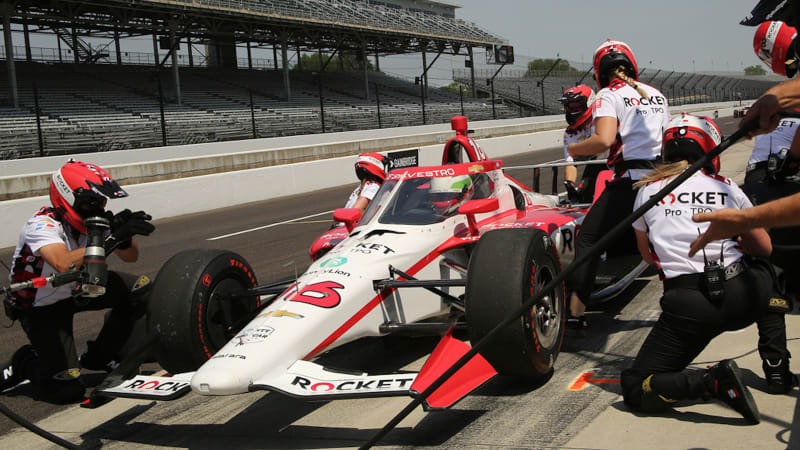 When the team rolled onto the track for the first Indy 500 practice, the women already had undergone months of pit stop training and study in the intricacies of the sport. Shaun Rinaman, Team Penske’s pit crew coach, has schooled the women on the finer points of changing tires, fueling the car and making adjustments – hopefully in six seconds.

“It’s like going to the Harvard of pit schools,” Paretta said.

When they started, their first pit stops were upwards of 18 seconds, which would lose nearly half a lap around Indy.

“They are not here to prove anything. They’re here because they really have a love and passion for the sport.”

“I think now our average is around five seconds,” said Andra Buzatu, a former diesel mechanic in the Coast Guard. “The process is so minute. You’d think it’s just taking a tire off, putting a tire on. But the angle of how you take the tire off, the angle of putting the tire on (is important). I’m super confident with how all of us stand when it comes down to pit stops.”

It’s uncertain how many women will be over the wall on pit stops in the 500. The past week essentially has served as a tryout for positions, and Paretta said there’s a possibility that some men will be involved.

In the garage it’s clear who’s doing the work. The men on loan from Team Penske are more hands-off, allowing the women to wrench the car.

“The women are much more comfortable and our Penske male teammates are stepping back more,” Conti said. “We’ve really come a long way since November.”

Conti said the women understand the spotlight that’s on them, and that they’re humbled by it.

“I think they’re much more mature than I was in my 20s,” she said. “They are not here to prove anything. They’re here because they really have a love and passion for the sport. They are very excited to be here, they are humbled to be here, they are very aware of the history of women in motorsport and they’re appreciative to those who went before them. They hope that little girls will look and say, ‘There’s someone doing that job who’s like me. I can do that.’”

Carlex Jaguar XJ Coupe restomod is neither British nor understated

Scott Pilgrim Vs. The World: 10 Behind-The-Scene Facts You Might Not Know About The Movie

Carlex Jaguar XJ Coupe restomod is neither British nor understated

What It's Like to Be in India's Covid-19 Crisis