How Ford burned $12 billion in Brazil

SAO PAULO — A century ago Henry Ford came to Brazil and established the town of Fordlandia, hoping to become an Amazonian rubber baron, but retreated deep in the red.

Now the automaker he founded is once again licking its Brazilian wounds, having abandoned production in the challenging market after burning through roughly 61 billion reais ($11.6 billion) in the past decade.

Ford Motor announced the closure of its manufacturing plants in January, dealing a heavy blow to its more than 5,000 workers in the country and almost 300 dealerships.

Previously unreported corporate filings show the scale of the financial woes that led to the decision. Ford had burned through $7.8 billion, the bulk in accumulated losses but also some cash injections, according to the documents filed in Sao Paulo state, where the automaker is registered in Brazil.

Add to that the $4.1 billion that Ford will shell out to extricate itself from its commitments, and the price tag for the Brazilian operation rises to almost $12 billion.

Almost all the losses and cash injections were in the past eight years, when the company has lost about $2,000 for every car it sold, Reuters calculations based on the filings and sales data indicate.

Ford, which does not separate out Brazil from South America in its financial results, declined to comment on the losses, cash injections and calculations.

The expensive retreat of the U.S. heavyweight underlines the risks for global automakers in Brazil, a country seen not long ago as one of the most promising growth markets in the world, but where tax, labor and logistics costs are high.

The COVID-19 pandemic has strained finances while Ford’s problems also reflect, in part, a strategic misstep that saw it lag rivals in transforming its lineup of unprofitable compact cars into higher-margin SUVs, according to half a dozen sources familiar with the company’s Brazilian operation.

Ford had in fact drafted a plan to shift into SUVs, larger cars with higher profit margins, but was too slow to implement it, they said.

“There were no other viable options,” Lyle Watters, Ford’s head for South America, told Reuters in a statement about the decision to exit the country.

Watters, who will start a new Ford role in China in July, cited an “unfavorable economic environment, lower vehicle demand (and) higher industry idle capacity” for the Brazil retreat.

He declined to comment on the SUV project, saying he would not “speculate on new product plans.”

A Ford spokesman in Brazil said the company was implementing “a lean and asset-light business model in the region, with a truly customer-centric mindset”.

Brazil is largely a lossmaker for global car companies, despite the government providing federal subsidies totaling $8 billion over the past decade and a 35% import tariff to shield local production.

Domestic costs are high. Even though local factories can make 5 million cars a year, more than double the number sold in the country, exports are minimal because prices are uncompetitive. And it costs automakers money to keep factories open while operating at low capacity.

Mexico, by contrast, exports more than 80% of the cars it makes, helped by free-trade agreements with the United States and Canada, making it an attractive alternative for the same carmakers that already operate in Brazil.

A 2019 study by consultant PwC found that selling a Mexican-made car in Brazil was 12% cheaper for an automaker than selling a locally-made vehicle, including production, tax and logistics costs.

The study was commissioned by Brazilian auto industry group Anfavea, which is lobbying the government to reduce taxes and labor costs.

The high Brazilian costs mean even carmakers who pivoted earlier than Ford to higher-margin SUVs, like the Brazilian units of players like Volkswagen, General Motors and Toyota, are struggling to stay in the black.

Volkswagen Brazil has lost $3.7 billion since 2011, according to the corporate filings in Sao Paulo state. GM Brazil has received $2.2 billion in cash injections since 2016, and Toyota Brazil last year required forgiveness on $1 billion of inter-company debt, the documents showed.

Volkswagen, GM and Toyota all declined to comment on the filings figures.

The Brazilian economy ministry did not respond to a request for comment about the Ford exit and problems faced by the auto sector. 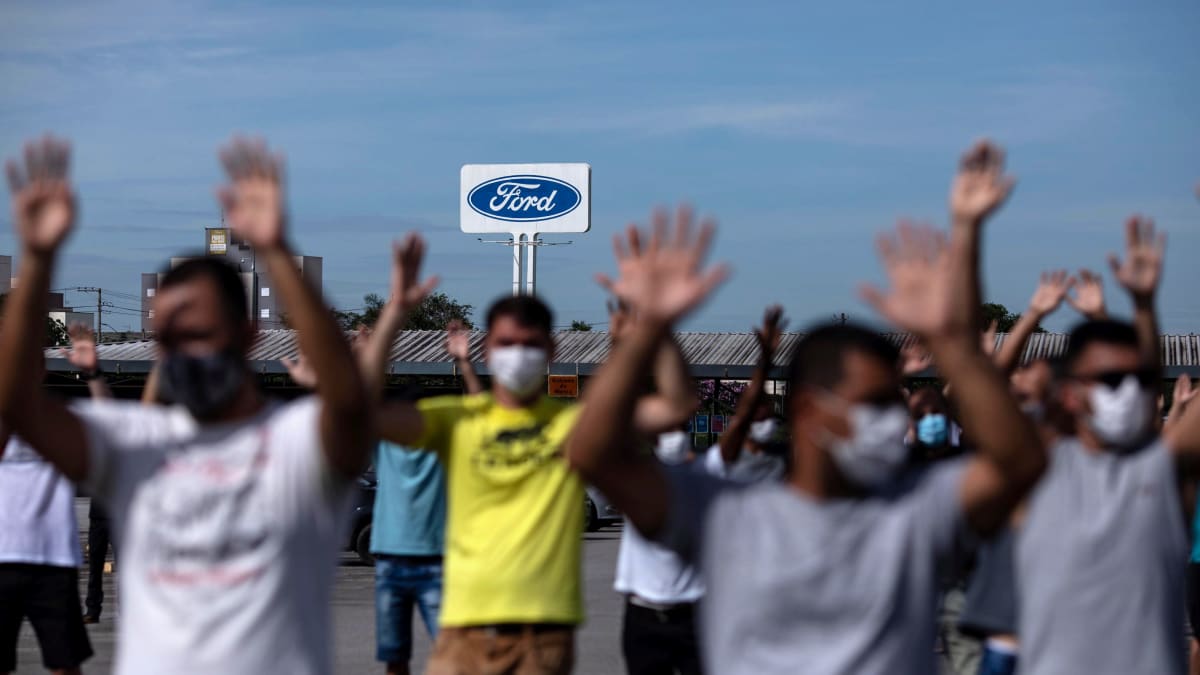 Workers protest outside a Ford Motor Co plant, after the company announced it will close its three plants in the country, in Taubate, Brazil, January 18, 2021. REUTERS/Roosevelt Cassio

Ford failed to develop a viable production business in Brazil despite a practice of pursuing tax subsidies, which totaled more than that of its rivals over the past decade.

Since 2011, Ford has reaped about $2.6 billion in tax subsidies, or a third of all federal automotive incentives distributed in that period, according to Reuters calculations based on official tax forfeiture figures.

In 2013, however, the business outlook began to change, as commodities prices crashed and dragged the local currency with it, sending Brazil into a deep recession made worse by corruption scandals. At the time, it was the world’s fourth largest auto market. It now ranks seventh.

Weak domestic demand and the uncompetitive exports pushed Ford to quintuple its bulk fleet sales between 2011 and 2019, and deepen the discounts to 30% or more, a person familiar with the pricing said.

Ford headquarters in Dearborn, Michigan, shored up its Brazilian subsidiary with $1.3 billion in cash injections, in nine transfers between March 2018 and January 2021, according to the Sao Paulo corporate filings.

By late 2019, Ford was considering the key strategic shift to manufacture SUVs in Brazil and had three models planned, according to three of the sources familiar with the operation.

Yet many of its competitors had already been revamping their lineup to produce such vehicles for about two years.

“The truth is, Ford failed to modernize its product lineup at the same speed as its rivals,” said Ricardo Bacellar, automotive head at KPMG’s consulting arm in Brazil.

In the end, the SUV plans never came to fruition.

By April 2020, the economic pain wrought by the pandemic forced Ford to reevaluate its plans for Brazil, the automaker has said.

Still, Ford made commitments to the government as late as November last year to invest more in Brazil and told its dealers in December that it expected improved sales in 2021, according to a government announcement and the dealers’ association.

It closed its three plants, the largest one in Camaçari, in the northeastern state of Bahia. It retains only a small operation selling imports, a niche market for high-end cars that the import tariffs make prohibitively expensive for many people.

Ford’s all-electric Mustang Mach 1, for example, which starts at $53,000 in the United States, will sell for $94,000 in Brazil, where per capita income is much lower.

Redesigned convertible on the way

Thousands of Police Officers Rally for More Protections in France

See if the Huawei Mate X2 survives a durability test

After Mexico City train collapse, families search for the missing

ZTE Axon 30 Ultra announced: Here’s everything you need to know!

Android and iOS: 32 apps & games now free for a limited time only