As President Biden and his profligate administration leave their fingerprints on more and more policy failures affecting millions of Americans, the liberal media’s tactic seems to be to barely cover or outright ignore these Democratic debacles. Instead, the broadcast evening newscasts are more excited by political dramas, such as the recent ouster of Representative Liz Cheney from her position in the House GOP leadership.

A Media Research Center study of evening news coverage during the first two weeks of May (May 1 to 14) found ABC, CBS and NBC spent a combined 32 minutes, 53 seconds on the political intrigue surrounding Cheney’s removal, hyped by the CBS Evening News as “the Republican Party’s civil war.” That’s far more airtime than these newscasts spent on a myriad of increasing hardships — from slow job growth to rising inflation — facing everyday Americans because of the Biden administration’s policy incompetence: 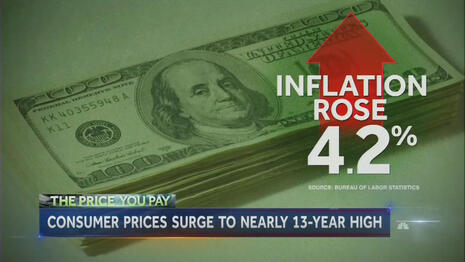 ■ Inflation Worst Since 2008: The May 12 report from the Labor Department showed consumer prices grew at an annual rate of 4.2%, the worst inflation report since September 2008. Core inflation (excluding food and energy) actually grew at its highest monthly rate since April 1982. But ABC’s World News Tonight couldn’t spare even a single second of precious airtime for this important economic warning.

The CBS Evening News devoted a mere 11 seconds to the report on May 12, never suggesting that one cause was the Biden administration and congressional Democrats throwing huge amounts of free money at Americans. But on NBC, which spent a total of 92 seconds on the report, correspondent Stephanie Ruhle at least briefly acknowledged that one reason for the surge in prices was that “many also have extra money from stimulus checks.”

A reminder: it was only a few weeks ago that these same newscasts were big cheerleaders for Biden’s massive $1.9 trillion COVID spending bill, including those stimulus checks. 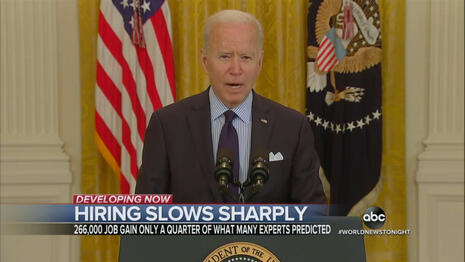 ■ Gov’t Checks Hurting Job Growth: The official May 7 jobs report unexpectedly saw the unemployment rate rise, to 6.1%, with the government confirming the creation of only 266,000 new jobs, a huge miss from the 1,000,000 new jobs that analysts expected. Then on May 11, the Labor Department reported that businesses had a record 8.1 million job openings to fill, suggesting the lack of job creation wasn’t a simple matter of supply-and-demand.

The weak jobs numbers did garner significant evening news coverage — 12 minutes, seven seconds — but the role Biden’s super-sized unemployment benefits played in suppressing job growth was buried. ABC’s World News Tonight offered a mere 45 seconds to how “Republicans argue” the free money was delaying many Americans re-entry into the workforce, while the CBS Evening News gave 94 seconds to how “Republicans claim” the extra payments are a problem.

For its part, the NBC Nightly News spent 77 seconds on the role of Biden’s enhanced benefits, and was the only newscast to show an aid recipient confessing the extra payments were a reason she refused to accept low-paying positions: “The unemployment is a little bit more than the pay, too. I’ll just be honest with that. It covers all my bills.” 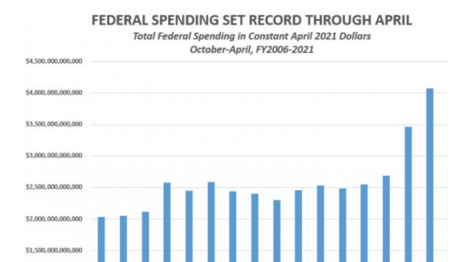 ■ Debt & Deficits at Record Highs: Thanks to the huge spending bill rammed through by Democrats on a party-line vote, U.S. federal spending reached a record $4,074,970,000,000 during the first seven months of the 2021 fiscal year, according to the Treasury Monthly statement released in early May, with a corresponding deficit of nearly $2 trillion dollars. The total accumulated debt of the federal government stood at more than $28 trillion at the end of April, $22 trillion of which was held by the public.

For perspective, the size of the entire U.S. economy (Gross Domestic Product) was also $22 trillion in the first quarter of 2021, making our current debt-to-GDP ratio the worst since World War II. Yet none of the three evening newscasts bothered to report on these new numbers when they were released. And, despite the Democrats’ unprecedented spending spree, an earlier MRC study of the first 80 days of the Biden administration found only 29 seconds of evening news airtime mentioned the exploding federal deficit or national debt.

■ April Border Numbers Worst Ever: Neither ABC’s World News Tonight nor the CBS Evening News bothered to tell viewers about a new report from Customs and Border Protection that showed border encounters on the U.S.-Mexico border were worse than ever in April — 178,622, surpassing the 20-year high of a (revised) 173,348 in March. This despite President Biden arguing in late April that “we’ve now gotten control” of the huge surge that has overwhelmed U.S. border security efforts. 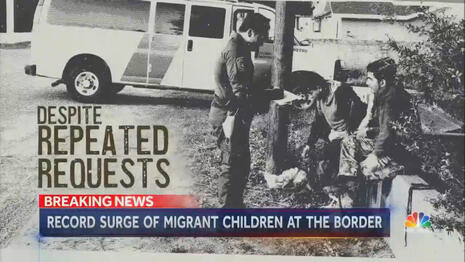 Only NBC’s Nightly News showed a modicum of interest, briefly noting on May 5 that in March “the number of migrant stopped at the border surged to more than 172,000, a 20-year high.” On May 11, a few hours before the April numbers were released, correspondent Gabe Gutierrez complained: “Despite repeated requests, Customs and Border Protection has not yet released updated apprehension numbers for April.” Yet despite those “repeated requests,” in subsequent newscasts NBC never actually bothered to report on the new numbers after their release.

Bitcoin and Encryption: A Race Between Criminals and the F.B.I.

Jorge Ramos Calls for Repeal of the Senate Filibuster

Has New York Hit a Progressive Plateau? The Mayor’s Race Is a Key Test.

How to reduce screen brightness beyond the basic slider