Uh-oh. There’s another right-wing Republican trying to disenfranchise minorities and suck up to “social conservatives.” He’s the British Prime Minister of Britain. That’s the bizarre view from CNN anyway.

Queen Elizabeth on Tuesday announced the priorities of the government in an annual speech. According to the Queen, “Legislation will be introduced to ensure the integrity of elections.”

According to CNN, “The new legislation would require voters to show identification to cast their ballots at a polling station.” Of course, CNN senior producer Luke McGee, writing on CNN.com, found nefarious motives in all this:

Why, then, is Johnson and his government doing this? A simple explanation could be that the UK government is putting on a performance for its core voter base: socially conservative voters in England.

In case you didn’t get it, McGee underlined that this must be racist:

It doesn’t take a huge leap to see that socially conservative English voters see a policy tackling election fraud and view it as a policy aimed at punishing ethnic minority groups.

Johnson is the leader of the British Conservative (or Tory) Party. But he’s hardly some American-style arch right-winger.

The analysis turned into full-on lecture as the CNN producer fretted, “Voter suppression is a sinister reality of the divisive politics that many Western democracies are now living through.” On Twitter, the journalist made his annoyance very clear: 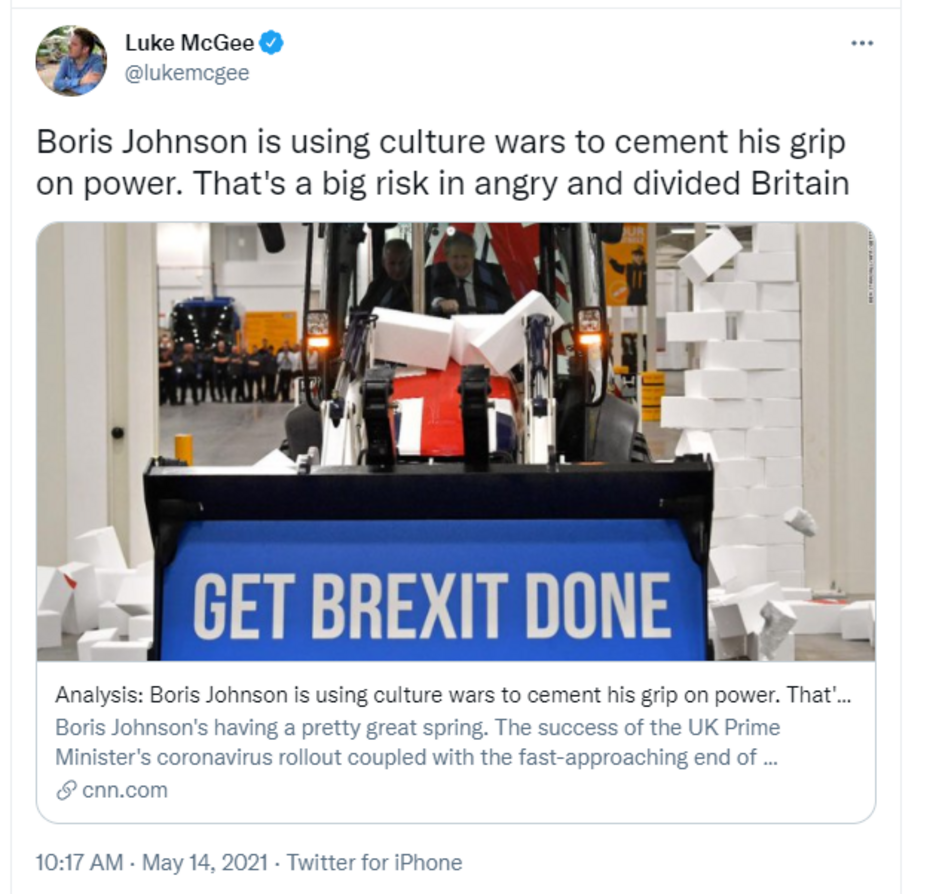 McGee closed by attacking the Conservative Johnson for forcing the Queen to read such horrible words in her speech:

So, perhaps Johnson should have thought twice before sending one of the most popular figures on the planet to read out policy that was catnip to US politicians who are seeking new and creative ways to smooth their path to victory in the future.

But we’ve seen all this before. CNN was appalled with Brexit. Anchor Christiane Amanpour suffered an epic meltdown in June of 2016 as she trashed the vote to leave the European Union, calling it “xenophobia” and a “white identity” win.