Amazon’s Echo Sow line received an upgrade in the form of the new second gen Echo Show 8 and 5 models. The pair is joined by a special Kids Edition Echo Show 5. The big new addition on the Echo Show 8 is the 13MP camera with 110-degree field of view like on the Echo Show 10. It can follow your movements and help you stay centered during video calls. The Echo Show 5 gets an updated 2MP cam but skips out on the fancy follow mode of the Echo Show 8. 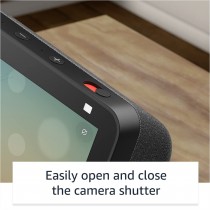 There’s an updated eight-core chipset on the Echo Show 8 as well a new software feature that detects when you enter a room to enter pre-determined user routines like turning on the lights or starting a connected smart home device. The design remains unchanged and rest of the core specs are identical to the outgoing Echo models. The new Echo Shows are available in gray and white colors. Echo Show 8 goes for $130 while Echo Show 5 is now $85. The Kids Edition goes for $95 with a free year’s worth of Amazon Kids Plus and a two year worry-free warranty.

WhatsApp boss on Pegasus: “This affects us all”. Do you agree?

Asus Zenfone 8 and 8 Flip are officially coming to India